Who SHOULD Win the Heisman

Is the player most deserving not even going to NY?

Coming into this final weekend of college football before the bowl games were selected, I thought that the Heisman race had dwindled itself down to two potential candidates. So you can imagine the surprised look on my face when I saw that the player I felt was the most deserving of this trophy, did not even make the list of finalists.

The obvious player out of the two would be Oregon quarterback Marcus Mariota. He was my selection for 2nd place, only because of the immense talent that he has around him and the previous success of his team and himself held him back from my first place spot. Also, I just felt that there was another quarterback who had been the better college football player this season.

We all knew how deep and talented this Oregon football team was, which is another reason why everything that this team has accomplished should come to the surprise of no one who know anything about college football.

When I envision the Heisman trophy, I imagine the player who meant the most to his team and who has had the most successful season, not only statistically, but who has embodied their team’s persona and has been the most pivotal part to their team’s success.

No other player fits that bill better than TCU quarterback Trevone Boykin. He has almost matched Mariota across the board, but the biggest difference is that no one expected TCU or Boykin to have this level of success.

Not taking anything away from the success of Oregon or Marcus Mariota, but no one would disagree that TCU has been underdogs all season, and they have been carried by Boykin every single step of the way.

TCU has been robbed twice in the last 48 hours and they should feel like something has been taken away from them. They had the number three spot in the playoff and they did nothing to lose that spot, all that happened is Ohio State won and they have a bigger name nationally, so they were chose over TCU to participate in the playoff. 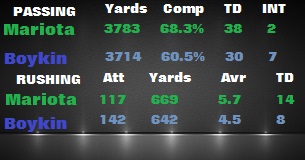 Trevone Boykin is a bonafied Heisman candidate who should be at the Heisman ceremony finishing in second place at worst, but instead has been given the most egregious snub of all time.
Boykin stands aside Mariota statistically as quarterback, and I would venture to say that he has more to do with his teams success. Mariota is just a spoke on the wheel in Oregon’s system, they will find someone to fill his spot next season, and the wheel will keep moving.
TCU on the other hand will have Boykin for one more season. When next season comes to an end, I would anticipate that Boykin will be accepting the Heisman trophy and will be moving on to the next step of his career and life.
Moving on won’t be as easy at TCU when Boykin graduates, he is the leader and the heart of that team, and they go where he carries them. That is what the Heisman is all about to me.