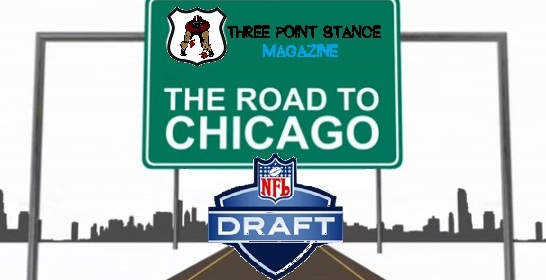 The combine has wrapped up and we are now in the fast lane headed towards the NFL Draft starting on April 30th. Before we get there though we will be releasing a six part series, chronicling our top five players at each position, culminating in our final mock draft. This installment will focus on Running Backs and Wide Receivers. Click here if you missed Part One – Interior Lineman, Part Two – Edge Rushers & Offensive Tackles,  Part Three – Cornerbacks & Safeties, or Part Four – Linebackers and Tight Ends

1. Melvin Gordon – Wisconsin
Ever heard that Drake song zero to one hundred? Well that’s how quickly Melvin Gordon can get in one cut, out another, and then into the end zone…real quick! 4.52 40 yard dash, that’s what he ran at the combine, all the while putting together one of the best seasons I have ever seen a college running back put together this season. He reminds me of a young Jamaal Charles, he can do it all! He should be selected in the first round.

2. Duke Johnson – Miami
Duke Johnson is immensely underrated, I would have him before Gurley even if he didn’t get injured. People look at his size and they completely toss him to the side like he’s some gimmicky player. Even though he is small, he is very hard to bring down. He runs hard and is the best in this class at catching the ball out of the back field and getting up field. He’s threat as a running back and a pass catcher. Reminds me of LeSean McCoy, he will be a gem of this class.

Apart from the injury, Gurley was really good at Georgia, but I still wouldn’t put him in my top two. Apart from the fact that he’s coming off a torn ACL this season and that he missed game in 2013 with an ankle injury. I question his speed as well, he moves well in and out of his cuts, but I don’t believe that he has the breakaway speed that a Melvin Gordon or Duke Johnson possess. On top of all that,  is he reliable? All things considered, he is my number three running back.

4. Ameer Abdullah – Nebraska
I want to like Abdullah so much! I really do! I just can’t like him as much as I’d like when he fumbles the ball as much as he does. He’s quick, his natural instincts show well when he has the ball in his hands, very good at finding the hole and hitting it quick. Very explosive play maker, he just needs to secure the ball more. That’s the only glaring hole that I see in his game.

5t. BJ Catalon – TCU
Versatility. Versatility. Versatility. That’s all you need to know about BJ Catalon. He can be used in a multitude of ways. From day one, even if he won’t be in your running back tandem, he can be your punt and kick returner the day he arrives to camp. I do believe that he can be a great change of pace back for a big back like a Marshawn Lynch. I don’t believe that he will ever be a three down back, but he can split outside and use his speed to catch bubbles and get yards that way. He’s versatile, and some team will mold him into a productive NFL player.

5t. Cameron Artis-Payne – Auburn
What you see is what you get with Cameron Artis-Payne, he doesn’t have barn burner speed, but he will lower his shoulder and put would be tackler on their backs. He’s as physical of a runner as there is in this running back class. Will never be great in the pass catching game, doesn’t really have a third gear, but is effective. He’s a workhorse, lacks the size that a Brandon Jacobs had, but reminds me of his type of style. 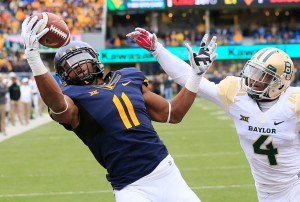 Kevin White can do it all! Once again this was a guy that went into the combine as my number one player at his position and did nothing to lose than ranking. Actually, when he ran a 4.35 40, he made me like him even more, and thought that was impossible. He has great feet, leaps out of the gym, which allows him to high point the ball extremely well and can secure the catch in traffic. Runs great routes, he’s a can’t miss guy, that simple.

2. Dorial Green-Beckham – Mizzou
If we’re talking about talent, then look no further DGB is your guy, but when you factor in his off the field problems he falls one spot in my rankings. This kid is 6 feet 5 inches tall and 237 pounds that can accelerate and get vertical with separation as quickly, if not quicker, than guys who are much smaller than he is. The kid is a physical freak of nature, he has the potential to be a Randy Moss type player, but he also has the potential to be another Josh Gordon.

3. DeVante Parker – Louisville
Did someone say freak of nature? Ok, yeah, well here’s another guy from that same mold in DeVante Parker. He’s climbed up my board since the season ended and he actually almost edged out DGB as my number two overall. This kid is a physical receiver, uses his large wingspan and vertical to go up and get the ball over smaller corners. Great at tracking the football and he has that “it” factor, a clutch gene if you will. Reminds me a lot of Dez Bryant, needs to add some muscle, but other than that he’s solid.

4t. Amari Cooper – Alabama
Before you get pissed off, let me clarify here, Amari Cooper is a good receiver, but this class is stacked with good receivers and there’s just a few that I like more than Cooper. I love his quickness and his willingness to be a blocker, but he drops the ball way too often for my taste. He also just doesn’t possess the physical attributes and size that a Devante Parker or DGB are blessed with, and I don’t see the competitive motor in Cooper that I see in Kevin White.

4t. Tre McBride – William & Mary
If you follow me on twitter, you probably don’t, you know how much I love this kid! He can be lined up inside, he can line up outside, he’s a great special teams player, he does it all! Very smart kid as well, was actually recruited by Harvard out of high school because of his success in the classroom. By all accounts he’s a hard worker, very soft hands, really good at high pointing the ball, and elevating to make the catch. Some team will walk away with a steal in the middle rounds.

5. Jaelen Strong – Arizona St.
Here’s another big pass catcher, Jaelen Strong out of Arizona St has the size, but lacks attention to detail and awareness on the field. He uses that size and strength to go up and get balls in coverage. Not a very fast guy, takes him a while to accelerate, and he will drop his fair share of balls. Some people compare him to Marques Colston, I don’t see it, could be that good, but will need some coaching and patience to get him there.