The combine has wrapped up and we are now in the fast lane headed towards the NFL Draft starting on April 30th. Before we get there though we will be releasing a six part series, chronicling our top five players at each position, culminating in our final mock draft. This installment will focus on Running Backs and Wide Receivers. Click here if you missed Part One – Interior Lineman, Part Two – Edge Rushers & Offensive Tackles,  Part Three – Cornerbacks & Safeties, Part Four – Linebackers & Tight Ends, or Part Five – Running Backs & Wide Receivers.

Here we go, we are finally here at the end of our Road to Chicago series. We have waited the best for last, not really this QB class is weak, but QBs is all we care about! It does however, have my number one overall player in entire draft, so that is where we will start!

1. Jameis Winston – Florida St.
There hasn’t been a quarterback this good to come out of college this pro-ready since Andrew Luck’s days at Stanford. Jameis Winston is head and shoulders above everyone else in this class, the gap between number one and number two is as steeper than anywhere else in my rankings. He is the prototypical quarterback, comfortable in the pocket, strong arm, great feet, can spin it as well as anyone, the kid is an absolute blue chip prospect. Turned the ball over a lot this past season, but that didn’t hurt Matt Ryan when he left Boston College, it shouldn’t hurt Winston. He’s the clear cut number one overall pick.

Who else didn’t realize that Bryce Petty could sling the ball like he did at the combine? I didn’t. In that spread offense at Baylor I didn’t really see how relaxed and fluidly his deep ball came out, until the combine. Now I still have my questions with Petty, as I always do with guys who come from spread out offenses, predetermined reads, footwork, etc. I don’t think he will be ready to play day one, I think he’ll need some seasoning probably two years behind a veteran, but he can be molded into a fine NFL quarterback.

3. Marcus Mariota – Oregon
I think Marcus Mariota is one of, if not the most, overrated prospect in this entire draft. There has never been a quarterback to come from that Oregon system that has succeeded when placed in a pro-style offense. I actually due put a lot of stock into that, and I think that is very telling as to what the logical future of Mariota in the NFL could/will be. In that Oregon system Marcus usually has two reads at a max, usually based off of bubble screen, he will be asked to do a hell of a lot more than that in the NFL. Have you ever seen him take a snap from center, take a 5 step drop, climb the pocket, read the whole field, and make a play? I haven’t. Great kid, great attitude, some team will be disappointed if/when they take him in the 1st round.

4t. Cody Fajardo – Nevada
I’m very high on this kid, many people have him as a 7th round grade, I’m on the record on twitter as saying I would take him in the 4th and as early as the 3rdif I was a quarterback needy team. I love his quick release, he showed that he had really nice footwork at the combine, and a strong enough arm to make any throw on the field. Great thrower on the run, is quick enough to use his feet to get yards on the run. Mechanics aren’t great, but if he has time to develop, I like this kid’s potential. 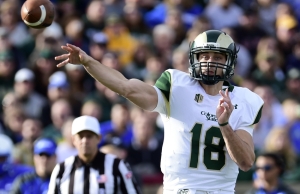 The thing I like the most about Grayson is his accuracy and touch. He has an innate ability to not only throw his receiver open, but keep him out of trouble as well. He also steps into the pocket, seems very comfortable with his feet inside the pocket, even with the ability and agility to make plays outside of the pocket. His mechanics aren’t great to look at, and he doesn’t have the ideal size that you look for in a quarterback. Although, with such a weak class, he could go sooner than a lot of people think he should.

5. Bryan Bennett – Southeastern Lousiana
Lack of elite arm strength and accuracy issues are the two major knocks on Bennett. Some people may know him as the guy that Marcus Mariota ran out of Eugene, he transferred after Mariota won the job. Bennett does show elite Johnny Manziel-esque movement and elusiveness inside the pocket. He isn’t the ideal size and does have less than great mechanics. Once more though, in a good QB class he goes undrafted, in this one I could see a team taking a 5th or 6th round flier on the kid.