The NFL offseason has to be brutal for the elite players in the game. Your career is totally defined by 16 Sundays in the fall, and if you are lucky four Sundays after the New Year rolls over. That kind of pressure has to be exhausting.

The other 30-ish weeks of the year your job is simple. Stay in shape, don’t get arrested, and TRY to not blow your money. But if you are a 15 year NFL veteran and four time Super Bowl Champion, you should be able to enjoy the spoils of your victories. 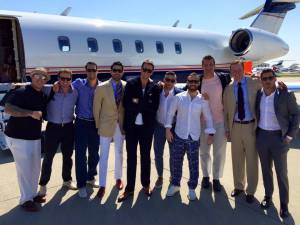 Cliff jumping in Costa Rica wasn’t enough for a thrill for the 37 year old quarterback, this past weekend he rounded up a handful of friends and teammates and swooped around the countryside for an epic two day getaway that few, if any of us, would ever get to experience.

Shortly after noon on Friday, Brady posted this picture on his Facebook page of him and his crew on the tarmac at Standiford Field in Louisville, KY with teammates Rob Gronkowski, Julian Edelman, Danny Amendola, former teammate Matt Cassel, and a few others in stop number one on the Bro Trip.

That night Brady, Gronk and crew attended the Brownstable Brown Gala, a $1,000 a plate fundraiser on the eve of the Kentucky Derby. Other NFL players in attendance included Aaron Rodgers, Clay Matthews, and Randall Cobb. That would have made for one heck of a pickup game. No pictures made it online regarding how crazy Gronk got, but if you have any imagination and know anything of Louisville’s reputation as a party city come Derby time, you can pretty much assume the best. 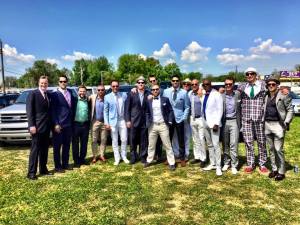 The following morning, the crew reassembled Avengers style at Churchill Downs for the 141st running of the Kentucky Derby posting this picture from the parking lot where the party had picked up a few more bros including for Patriots and current Denver Broncos wide receiver Wes Welker.

Welkers horse Undrafted finished second for the second consecutive year in the Grade 3 – Twin Spires Turf Sprint on the Derby under card. Good news for Welker and his connections, there was no appearance by Molly or pictures of Wes handing out Benjamins like an ATM.

Inside Churchill Downs though there were plenty of other solid photos of the boys adventures. 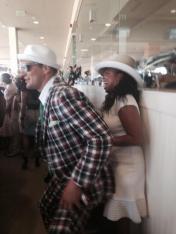 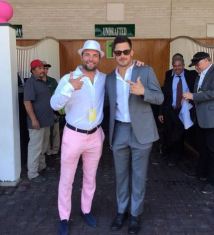 Of all of these guys, Gronk is the only one in a tie? Gronk twerking on ESPN’s Jemel Hill, and Texas Tech Red Raider alums Welker and Amendola go “Guns Up” 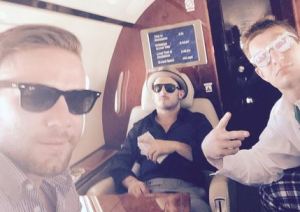 After American Pharoah won the Run for the Roses, the boys hauled from Churchill back to the Louisville airport where they went wheels up en route to Las Vegas for the Mayweather-Pacquiao fight at the MGM Grand Garden Arena.

Danny Amendola didn’t even have time to put his money in his pockets before they were airborne on the way west to Sin City.

A few hours later their plane lands in Las Vegas, NV and the crew enters the arena among a vast amount of athletes, celebrities, faux celebs, and people dumb enough to fork over a minimum $1,500 to see two guys who should have fought five years ago dance around for 45 minutes.

But this is wear the bromance ends.

Brady had “baller status” ringside seats, while the rest of the gang was banished to the balcony. 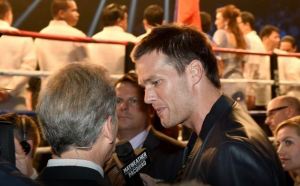 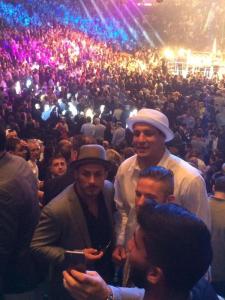 After the fight ended NONE of the attending bros tweeted, posted to instagram, or made the arrest blotter so here is hoping they knocked out on the plane back to Boston and spent Sunday like the rest of us.