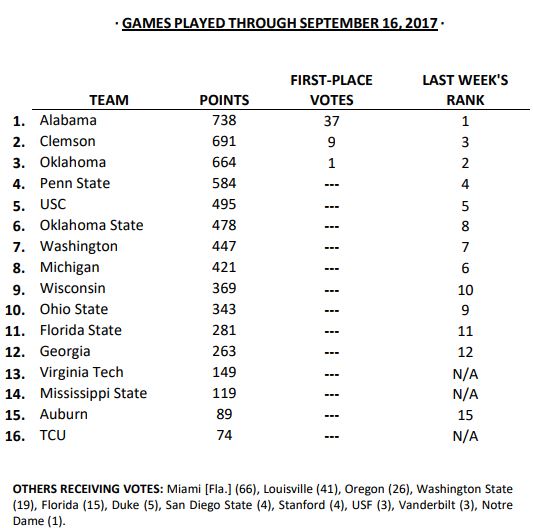 -Alabama remained No. 1, but received seven fewer first-place votes than in Week 2. Clemson traded places with Oklahoma by picking up nine first-place votes following an impressive victory at Louisville (47-21).
-There was little movement in the first 12 places after that. Virginia Tech, Mississippi State and TCU each moved into the poll for the first time this season as LSU, Louisville (after losses) and idle Miami (Fla.) dropped out.
-The Big Ten and SEC had four teams each in the Poll. The ACC and Big 12 had three each and the Pac-12 had two.
KEY GAMES THIS WEEK:  No. 1 Alabama at Vanderbilt; Boston College at No. 2 Clemson; No.3 Oklahoma at Baylor; No. 4 Penn State at Iowa; No. 5 USC at California; No. 16 TCU at No. 6 Oklahoma State; No. 7 Washington at Colorado; No. 8 Michigan at Purdue; UNLV at No. 10 Ohio State; North Carolina State at No. 11 Florida State; No. 14 Mississippi State at No. 12 Georgia; Old Dominion at No. 13 Virginia Tech; No. 15 Auburn at Missouri.