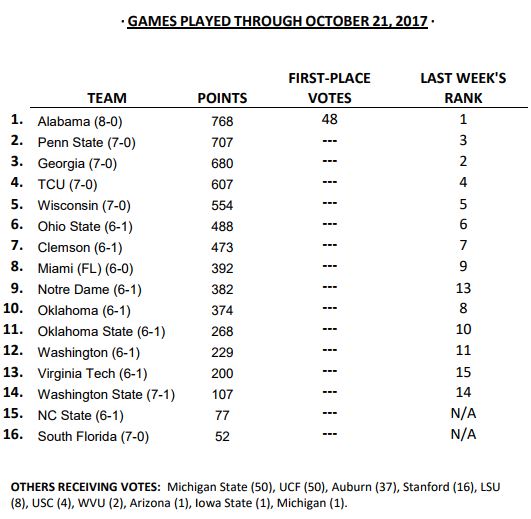 -Top-ranked Alabama, after a dominant home victory over Tennessee, received all 48 first-place votes for a second straight week.Penn State moved up to No. 2 after dispatching Michigan. Idle Georgia dropped a spot to No. 3.TCU, Wisconsin, Ohio State and Clemson held steady at Nos. 4-7.Notre Dame knockedUSC out of the poll and moved up to No. 9 after the victory over the Trojans. The Wolverines also dropped out of the poll. Entering the poll for the first time ever were North Carolina State and South Florida.
-The ACC led all conferences with four teams in the poll. The Big Ten and Big 12 had three each and the Pac-12 and SEC two each. The American had one team and the Independents one.