Kentucky makes their first ever appearance 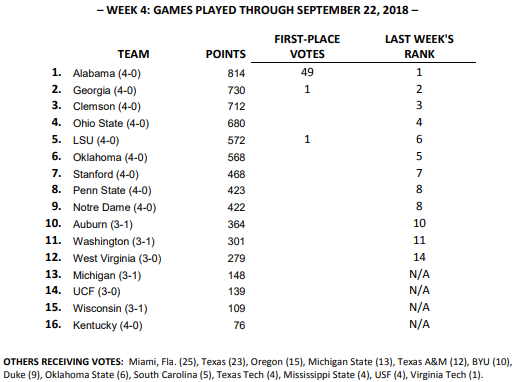 Notes:
Alabama remained No. 1 after a decisive victory over Texas A&M, receiving 49 of a possible 51 first-place votes. The first four teams remained in the same order with Georgia, Clemson and Ohio State next. Only minor shuffling  occurred with Nos. 5 to 11.
West Virginia moved from No. 14 to No. 12 as four teams dropped out of the poll after losses. Virginia Tech was upset by Old Dominion. Mississippi State fell to Kentucky. Oklahoma State dropped a home game to Texas Tech. And TCU lost at Texas. Those teams were replaced Nos. 13 to 16 by Michigan, UCF, Wisconsin and Kentucky. With a 4-0 start, Kentucky appears for the first time ever in the five-year history of the Super 16 Poll.
The SEC leads all conferences with five teams in the poll, followed by the Big Ten (four), Big 12 (two), Pac-12 (two) and the ACC, the American and Independents one team each.
Games This Week:
Louisiana at No. 1 Alabama; Tennessee at  No. 2 Georgia; Syracuse at No. 3 Clemson; No. 4 Ohio State at No. 8 Penn State;  Mississippi at No. 5 LSU; Baylor at No. 6 Oklahoma; No. 7 Stanford at No. 9 Notre Dame; Southern Mississippi at No. 10 Auburn; BYU at No. 11 Washington; No. 12 West Virginia at Texas Tech; No.13 Michigan at Northwestern; Pitt at No. 14 UCF; and South Carolina at No. 16 Kentucky.